For many years I have had an obsession with trying to photographing water drops and water drop collisions. There’s something about seeing liquids collide and the beautiful chaos that ensues.

My first attempt at capturing a collision was a long drawn out process of trial and error, and after several hours and hundreds of shutter releases later, I was left with a nice drop but no collisions at all.

Though at the time I was happy to have caught just one drop, looking back it isn’t very sharp due to a low powered flash set at full power. This was staged with a scrapbooking glitter paper in back of a small bowl of water.

For the water drop, I went low budget that filled a plastic bag with water suspended from a tripod. I cut a small hole in one of the corners and gradually increased the size of the hole until the drops were large and frequent enough to get a rhythm. The difficult part for me was releasing the shutter just after the drop hit the surface of the water rather than anticipating the impact and pressing it just before.

After many, many more waisted attempts to catch a collision I broke down and made an investment in a StopShot. This is a great little setup that allows you to time precise drops down to the millisecond. The ability to fine-tune the size of the drops and time in-between shots allows for some stunning images.

These images are all of 2 water drops released within milliseconds of each other falling into a trey of water. As the first drop impacts the water and rebounds back up, the second drop impacts the rebounding drop causing several different reactions. Some impacts just flatten the water almost like a nail head and others splatter like an explosion. Adding food coloring to the water really brings out some great reactions. The image below as with red water drops falling into a pan of clear water with a little dish soap in it.

The small bubble in the stem is from the dish soap and you can see the swirl of the red food coloring mixing with the water if you look closely. I really like the “bending” of the water as the second drop falls around the rebounding drop.

The process is really very simple with the StopShot. The control box connects to the drop timer as well as a strobe light source, I used speed lights in most of these. The camera is set to bulb and I release the shutter. At the same time I press the release button on the StopShot that releases the water drops. Once the timing is down, the flash will fire as the drops collide and I close the shutter. This freezes the image as you see below.

This isn’t a plug in and go system. There is a lot of calibrating and trial to get the timing of the drops just right. But after a lot of attempts and patience, you can really get some great images. 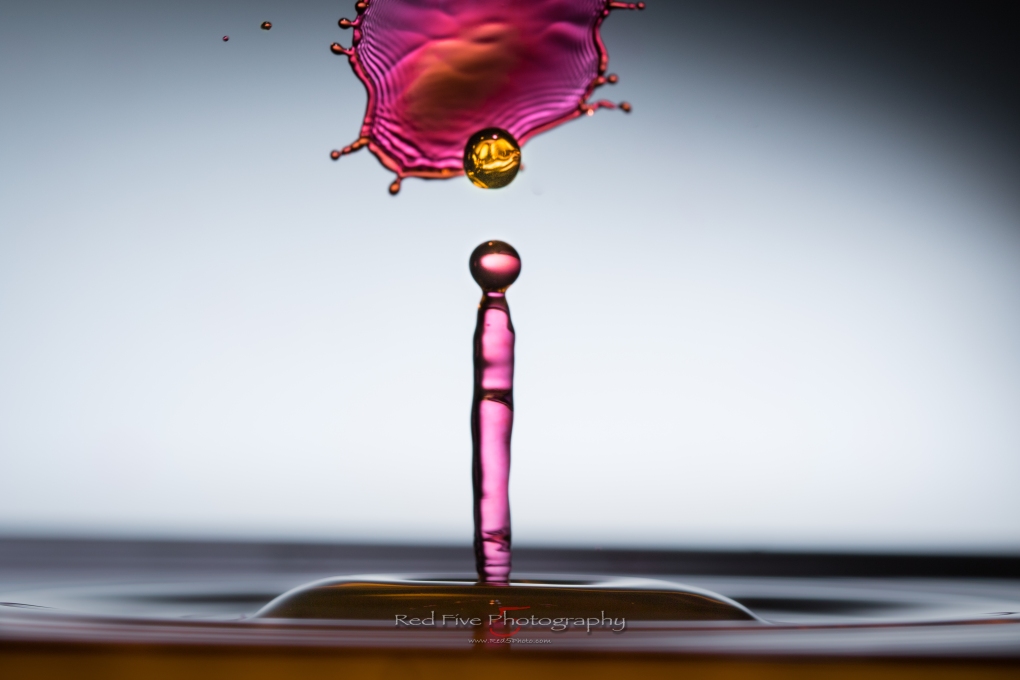 Red 5 Photography is the alter ego of Jason Squyres, a New Braunfels, Texas Based Landscape Photographer. “When I was young, I can’t remember what age, I picked up my fathers Canon FTb and never looked back”. It all started with film cameras and then on to digital, but always Canon. If I am nothing else, I am a faithful.

When I started pointing a camera at things and pushing buttons, it was to satisfy my creative side, and that is true to this day. It wasn’t ever anything that I thought about doing for a living because that would take the enjoyment out of it, or so I thought. When I realized I could make money doing something I love, well that was all icing. Photography isn’t cheap after all.

Over the past few years, I have been blessed enough to have my images in various magazines, featured on several websites, and even won a few awards here and there. It is still to this day, humbling and makes me a little uncomfortable. Behind the camera is where I prefer to be and for some reason, I have never been comfortable with the attention.

Photography is something that I truly love, it has changed my life in many ways, I like to think they have all been positive. Landscape photography goes hand in hand with another favorite past time, being in the great outdoors. Some of my favorite memories come from heading out for a well-planed photo trip, just to be denied the opportunity to even take the camera out due to weather or conditions. Getting out to a location and just enjoying Gods creations can be better than any image I may have wanted to take.

Life outside of photography is filled with a lot of support from my greatest love and what I consider to be proof that everyone has a special someone out there, Mrs. Red 5 herself. Stephanie and I got married in September of 2010 and I love her more than Snape loves Lily. When I am not out getting lost in Texas, we eat, drink, and travel with the occasional Netflix marathon spent not getting off the couch.

If you're interested in learning more, shoot me a message. Meeting new people with an obsession for photography is something I always enjoy, and I am always open for new projects and ideas.